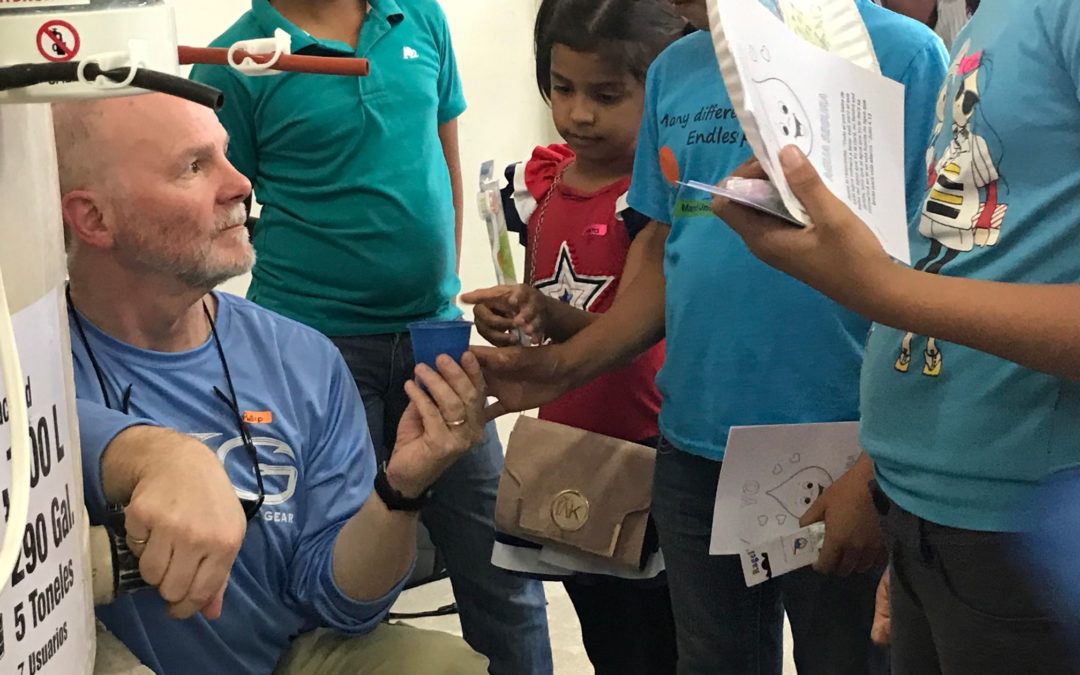 “Which of the water purification systems installed over the last four years is still in use today?”  That’s the question the Luke 9:2 Ministries board of directors send Doug Eaton and Jorge Luna to Honduras in March 2019 to answer.  The answer was a resounding, “Yes…but…”

Although the majority of the 11 systems currently in place are in regular use, a few had fallen into disrepair or were no long needed.  Dr. Ponce and Jorge Luna spent 3 days visiting 6 existing locations to follow up with community leaders to determine if systems were still needed and if they were meeting the needs of the people in the area. 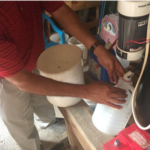 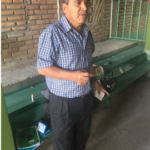 Pastor Pedro in Via Nueva 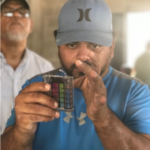 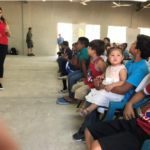 Nellet teaching a group of children 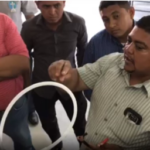 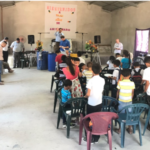 Pastor Maurcio prays over the mission team, the volunteers and children in his congregation in Coyolar

La Labranza. Located near Talanga, the system was installed here in 2016 is no longer needed. The people in the area have easy access to 5-gallon containers of purified water through local vendors for 34 lempiras (or $1.30 US).  This water chlorinator (M-100) will be refurbished and use in another location.

Las Flores. This community has their own water treatment system now! The new system serves about 120 families. Each

family paid 1,500 lempiras up front and pays 100 l. per month to receive water twice each week.  Each household contributed a day of labor to install the system.  They have a board of directors.  A hired “manager” turns on the water 2 times each week and maintains the system. Pastor Leonidas, agreed to “bless” others by allowing us to use the chlorinator (circa. 2015) in another location.

Talanga.  In the neighborhood of Jiron, Pastora Fermina and her son Kevin received a refresher course in how to operate the system installed there in 2015.  The church, a mission of Iglesia Amistad Cristiana, continues to serve this impoverished neighborhood with weekly services and a feeding program for children.  A new 12-volt power supply was given to the church.

Via Nueva. A visit with pastor Pedro in Via Nueva on the East side of Tegucigalpa discovered the church there using the chlorinator to purify water for their school and church activities. Pastor Pedro was encouraged to also use the safe water as an outreach and ministry tool beyond the walls of their building.  The church purchases water from a travelling tanker truck supplier.

Casa de Diamantes. The team met with Norma at Casa de Diamantes and discovered the ministry is constructing a new metal frame to mount the safe water tank at the 2nd floor walkway level.  The church that meets here raised funds to partially offset the cost of a new 12-volt power supply.  They purchase water from a tanker truck supplier and can store 2 truckloads in an underground reservoir below the kitchen area.  A pump will carry water up to the smaller tank to be chlorinated.

Los Charcos. Church members Edith and Elena in Los Charcos supply safe drinking water to a nearby school for about 150 students. They have a well from which they THINK they can draw uncontaminated water.  The well is on private property and the owner has agreed to not use chemicals on the land.  Dr. Jorge will return soon to either a) ask them to sign an agreement for the use of the safe water system, or b) if the well water proves to be safe, pick up the chlorinator which will not be needed any more.

La Paz. Dr. Ponce, Jorge Luna and Doug Eaton visited Leti (Letsbi’s sister) in La Paz.  Their family and a local church are working in a community on the edge of town called Buenos Aires. A church and community center are under construction with the help of a partnering church in Minnesota.  The main church building “shell” is complete. Additional rooms are under construction including a kitchen, dining area, bathrooms and temporary apartment-style rooms.  They asked us to provide a water chlorinator.  We agreed to do so and picked Leti’s son, Mabiel as the coordinator.

Agreement Document. Jorge Luna crafted an “agreement” document to be signed by representatives of Luke 9:2 Ministries, Amar y Servir (Dr. Ponce’s ministry) and a local site coordinator at each future location.  This Spanish language document will insure there is a clear understanding between all parties.

Health and Hygiene Curriculum.  Doug Eaton worked with Nellet Orellana (daughter of Pastors Nelson and Letsbi) to put together a Health and Hygiene lessons in Spanish.  They assembled materials, translated lesson plans, printed posters, created handouts and purchased supplies.  Nellet travelled with the team for a week and taught the group lessons with large groups of children at 3 locations – one in La Paz and two in the Choluteca area.

La Paz. Dr. Jorge Ponce, Phillip White, Spencer Hissam, Doug Eaton and Nellet Orellana travelled to La Paz on March 15, 2019.  The project coordinator for this site is Mabiel, the nephew of Letsbi.  Nellet taught lessons to about 40 children ages 2 to 15.  The M-100 (repurposed from another location) was attached, temporarily, to a portable water tank.  It will be use in a more permanent system when the building is finished. Buenos Aires is very impoverished with no electricity or running water.  The homes are small and little more than temporary shelters.  Leti, Letsbi’s sister and Mabiel’s mother, has a passion to serve the people in this community.

Choluteca. The church here is called Iglesia Gloria de Lo Alto in the neighborhood called Bario El Eden. Rony Paz is the pastor. The team travelled to Choluteca on Saturday, March 16th and stayed in a local hotel for 3 nights. We met a group of trainees the next morning. A 1,110 liter/290-gallon tank was sitting on the platform at the front of the church sanctuary full of water and ready to chlorinate. Within an hour the first batch process was complete using the M-100 (another repurposed unit). The AC/DC power supply was amazingly rapid, even with such a large tank.  Nellet and Nelson Jr. led the group of 25 or so children and moms in activities and lessons about health and hygiene.  Pastor Mauricio from nearby Coyolar joined the training as well. Pastor Rony took us on a drive around the neighborhoods surrounding the church.  We interviewed Pastor Rony and finished up at the church around 1:30 PM.   The team took the rest of the day off and enjoyed a meal at a restaurant on the beach.

Choluteca Area – Coyolar.  On Monday, March 18th, the team travelled to Coyolar, a rural community about a 30-minute drive from Choluteca to the south east towards Nicaragua.  Rony, Moises and Favio went with us. The church is located a few miles off the highway on a very rough dirt road. We passed what appeared to be abandoned hand pump along the way and a hand dug well in a dry river bed where a group of men were drawing water. There were two 55-gallon plastic barrels full of water waiting on us in the church building when we arrived. We setup and ran the M-100 (a new unit purchased this year) chlorinator which brought both barrels to well over 5 PPM of free and available chlorine in just a few minutes. Nellet led about 30 children in activities and lessons. The pastor spoke to the children and the adults who had gathered.  Another trainee, Jionis started leaning the system.

The next day, the team returned to confirm Pastor Mauricio’s full understanding of the system.  He passed with flying colors and we presented him with a certificate of completion.  That afternoon, we returned the Tegucigalpa (about a 4-hour drive) and prepared to return to the US the following day.

Next Trip.  Planning for our next trip is already underway.  Sites are being evaluated and potential project coordinators are being recruited.  Stay tuned for updates!